Visit OberlinChaos Clubhouse to see the latest posts and developments.
Aphabetical Index of all Posts
Random index of All Posts.

The Oberlin BOT and administration have smashed the equivalent of 225 Steinway model D9 concert grand pianos so far in their vendetta against Gibson’s Bakery, and they are not done!

That’s right — the Conservatory could have bought 225 Steinway model D9 Concert Grand Pianos with the money which the College so needlessly blew. And, their effort to destroy that tiny little bakery failed. It failed because the College not only slandered the Gibsons but left behind a paper trail that was a plaintiff lawyer’s dream come true. Don’t you think the culprits should have known better? Where is the payoff in this for the BOT and the college administration?

One explanation is managerial incompetence allowed the Gibson embarrassment to develop unchecked. Now they must obscure their follies by distracting attention and “putting the Gibsons in their place.”

The guilty want to say they gave their all to win the war with the Gibsons, which they created. This explanation seems plausible, considering that the only thing required to continue fighting is a lot of somebody else’s money. The College is an excellent somebody else to sucker into laundering the resumés of the guilty and indemnifying the guilty against personal liability for their “woke” stunts. 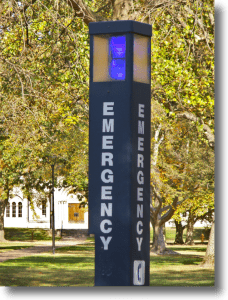 How? You spend somebody else’s money to pursue great causes that will look good enough on resumés and obscure the sins that lurk in the shadows.

There was a time when Oberlin College did not blow money that could buy pianos on bogus “woke” causes, and no one needed emergency call phones for protection. Times have changed. Perhaps the new emergency phones will allow someone to summon some common sense for the BOT and College administration.

Top of page and table of contents.
Aphabetical Index of all Posts
Random index of All Posts.